I was struck by the appropriateness of this phrase to our government today. First, a couple of words about the phrase itself:

There were no fiddles we know of during Roman times although they had other stringed instrument, the best known of these, the lyre. Nero loved to perform and had aspirations to be as good as professional performers and commissioned the making of lyres by the best in Rome. Suetonius, who viciously attacked Nero (with good reason in general), claimed that Nero had the fires set that burned down a substantial part of Rome in 64 AD as a means to forward his aim of urban renewal. He also claimed that Nero sang "The Fall of Llium" as he watched the flames engulf the city. Others saw Nero's actions as moderate and even a help in the catastrophe. In any case, the meaning of the phrase as it comes to us is clear, an act of purposely ignoring a catastrophe as it happens around us.

Such is the case with our government today. In an excellent editorial by Paul Krugman in the NY Times he points out the acts of congress concerning global warming with statements like:

And as I watched the deniers make their arguments, I couldn’t help thinking that I was watching a form of treason — treason against the planet.

But if you watched the debate on Friday, you didn’t see people who’ve thought hard about a crucial issue, and are trying to do the right thing. What you saw, instead, were people who show no sign of being interested in the truth. They don’t like the political and policy implications of climate change, so they’ve decided not to believe in it — and they’ll grab any argument, no matter how disreputable, that feeds their denial.

See It to Believe It

One of the things you learn as a skeptic is that sometimes seeing it isn't believing it.
Our group logo was meant to symbolize this idea with an apparent figure visible even if it really isn't there. (the symbol would probably be better if we could have slightly curved the line ends in the punctuated triangle).

Anyway, I came across a great optical illusion, by way of onegoodmove.org from Phil Plaits blog on bad astronomy at:

The color illusion is so striking, it is hard to believe.

The University of Nottingham in England has been creating fun websites for teaching science.

Previously, they created a web site giving information about the elements:
http://www.periodicvideos.com/#

There is a similar site, also from England and the University of Sheffield that includes much more information and some amusing touches:
http://www.webelements.com/

For instance, under Iridium, they have the following cartoon: 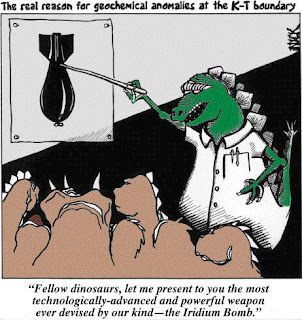 Anyway, Nottingham has also started up a web site with nice little videos about various symbols of science. Here you can learn about symbols as diverse as Jupiter to the fine structure constant to Feiganbaum's constant:
http://www.sixtysymbols.com/#
Posted by raa at 6/25/2009 12:36:00 PM 6 comments:

Apparently PZ Myers will be taking a trip to the Creation Museum in Northern Kentucky this August. No details, yet. PZ has been arguing with Ken Ham recently and challenged him to invite actual scientists to tour the museum for an official review. Could be interesting.
Posted by Clint Bourgeois at 6/25/2009 11:56:00 AM 4 comments:

An interesting story I got from Onegoodmove.org.
I had always wondered whether humans were still evolving through a biological level of natural selection. The argument against would be that society supersedes selection. For instance, a society with remedies for genetic ailments may not naturally select for evolutionary improvements.
This article suggests the opposite with some genomic and observational evidence. They make the point that evolution is faster in larger populations, such as humans today.
http://www.dailygalaxy.com/my_weblog/2009/06/the-past-40000-years-are-human-evolving-faster-a-galaxy-classic.html#more
Posted by raa at 6/24/2009 11:18:00 AM 3 comments:

The North American Paleontological Convention will be held in Cincinnati this week. Check The Panda's Thumb for more details. Lots of movers and shakers in the battle against Creationists will be here including Genie Scott and Ken Miller.

The Skeptic's Circle is a roundup of some of the recent skeptical blogging in (usually) the past two weeks. A different blog hosts the circle for each edition and some get quite creative in how they link to the various blogs who participate in the circle. It is a good way to catch up on the issues that have been discussed recently in the news or behind the scenes in the skeptical blogosphere.

Welcome to the Cincinnati Skeptics Blog

If you are a member of the Cincinnati Skeptics and would like to be able to post, please Email one of the officers or let them know at the next meeting.